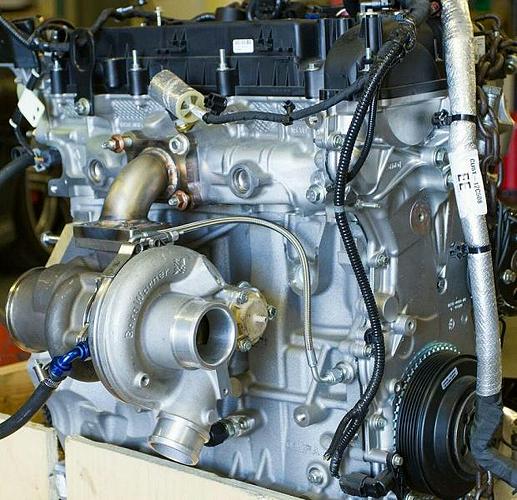 The Ford 2.0L EcoBoost delivers great performance from that factory, but there’s still more power that can be had. A few basic bolt-on upgrades can boost the 2.0L inline-4 to 300 horsepower.

A few of the best 2.0L EcoBoost performance upgrades include:

These mods aren’t in any specific order. Everyone has their own ideas of which mods are best to start with. However, most will agree a tune is the best starting point. Nonetheless, outside of major mods, the above list is a good starting point to squeeze more power out of the 2.0L EcoBoost engine.

A tune or tuner for the 2.0L EcoBoost is the foundation to making more power. It offers the best bang for the buck on an otherwise stock 2.0L turbo engine. A tune alone can offer gains around 20-50 horsepower and 30-70 lbs-ft torque.

Tunes also allow you to extract the full potential from other performance upgrades. Other bolt-on upgrades simply don’t offer max performance without the help of a tune. This is because a tune properly adjusts for the additional air-flow, fueling, etc.

Compared to some other EcoBoost engines the 2.0L doesn’t have a big selection of tuning options. However, there are still plenty out there. It’s important to look for a 2.0L EcoBoost tuner from a reputable and trusted company. Otherwise, which tune is right for each person can vary. Definitely consider a tune that has good support and room for swapping flashes/maps in the future, though.

Which tune is right for each person may be different and lots of tuning options exist. Nonetheless, we believe a few great tuner options for the 2.0L EcoBoost include:

Combining a tune and intake is a popular choice. It makes sense since adding boost and power requires more air-flow. However, the Ford 2.0L stock intake is actually pretty efficient from the factory. Small gains of 3-7 horsepower are possible with a 2.0L EcoBoost performance intake upgrade. It’s possible to pick up more power with full bolt-ons on an aggressive tune.

The stock intake can usually handle the air-flow demands with a conservative tune only and no other mods. In these cases the 2.0L EcoBoost might only gain a few horsepower. Biggest power gains from an intake upgrade will be seen by those running a tune, downpipes, FMIC, better fueling, etc.

An open intake is simply open to the engine bay. Closed intake systems use an air-box and shield the filter inside the box. Open intakes do pull in slightly warmer air due to heat in the engine bay. However, that has little to no affect on a turbo engine. A lot of heat is generated by the turbos anyways. It’s then cooled by the intercooler. In essence, temperature at the intake has little to no effect on the intercoolers ability to cool the charge air.

Open intakes are a preference on turbo engines since they often provide more air-flow. They will also create more turbo and induction sounds. Ultimately, most intakes are going to provide the same performance on the 2.0L EcoBoost engine. Look for something with a quality air filter from well-known companies like S&B or K&N.

Upgrading the 2.0L EcoBoost downpipe comes with many benefits outside of just horsepower. A few of those benefits are:

Power and torque gains from a DP upgrade are pretty solid. Quicker turbo spool will add more low-end torque and give you a bigger kick back into the seat. Additionally, reducing back-pressure is generally healthier for the engine. It can lower EGT’s and stress on the engine and turbo. Top that off with a louder exhaust – one that’s not obnoxiously loud – and its easy to see why an upgraded downpipe is a great mod for the 2.0L EcoBoost.

Again, the primary goal with a downpipe is to reduce back-pressure directly behind the turbo. That’s what helps to offer more power, quicker spool, lower EGT’s, etc. A catless (all the catalytic converters are removed) downpipe will have the least restriction and therefore the least back-pressure. As such, 2.0L EcoBoost catless downpipes will add the most benefit to performance.

However, catless downpipes are technically illegal and produce a bit more of a raw exhaust smell. That’s where high-flow catted options come into play. They will still offer the same benefits as a catless downpipe. Simply to a slightly lesser extent. Expect a high-flow 2.0 EcoBoost downpipe to gain about 3-5whp less than a catless option.

Unfortunately, high-flow downpipes with cats can be quite a bit more expensive. Cats aren’t cheap to make which is the primary reason. Also – even though a high-flow DP should pass visual and actual emissions testing – the EPA still considers them illegal.

Front mount intercoolers are another great bolt-on performance upgrade for the Ford 2.0L EcoBoost engine. The stock intercooler is effective on stock vehicles or with a very modest tune. However, start adding boost and the 2.0L FMIC quickly becomes overwhelmed.

In turn, the engine begins heat soaking as IAT’s climb above standard levels. Essentially, heat soak means the turbo is running so hot the intercooler can no longer effectively cool the charge air. In turn, the engine will pull ignition timing to prevent any pre-detonation (plus hot air is less dense). Point is – heat soak leads to quite a bit of power loss.

That said, an FMIC upgrade alone isn’t going to add too much peak horsepower. Rather, the biggest benefit is consistent performance and a healthier engine – especially during back-to-back pulls, track days, or canyon runs. Some benefits of 2.0L EcoBoost performance intercooler upgrades include:

On glory runs an upgraded intercooler might only offer about 5-10 horsepower, if that. However, after beating on the car and engine for a while it can prevent massive power loss. Losing 10, 20, 30 horsepower on a stock intercooler isn’t impossible.

We won’t spend quite as much time on this topic, but it’s a very important one. Quality fueling is incredibly important if you want to maximize the 2.0L EcoBoost engines performance. It also helps reduce the chance of engine knocks along with many other benefits.

We highly recommend running 91 or 93 octane at the very least. If you have easy access to higher quality pump fuels then all the better. Turbo engines love octane since it helps mitigate the chance of engine knocks. That means you can safely run more boost and more power.

What we ultimately recommend is running an E85 blend with the appropriate tune. Something like E30 fueling will offer notable benefits over standard pump fuels. Ethanol fuel has an incredibly high octane rating; somewhere in the ballpark of 108 octane with full E85. Of course, effective octane rating won’t be that high if you’re only running E30.

However, it’s still a huge improvement over 93 octane. E85 also burns much cooler and requires more fuel be injected. All of this adds up to a very happy engine that’s less prone to engine knocks. That means you can run more aggressive ignition timing and turn up boost, which means good power improvements for the 2.0L EcoBoost. E30 blends with a proper tune can unleash an extra 10-15 horsepower. A lot more power is possible with an upgraded turbo or other major upgrades.

Methanol injection is another solid fueling option. It’s actually a totally different system, though, so we don’t recommend this for beginners. You’ll need a full water-methanol injection (WMI) kit like this option here. You also have to source methanol and mix it with the water. This is another topic we’ll expand on in the future.

Anyways, methanol is considered a highly flammable and high octane fuel. It offers similar benefits to E85, but has one major advantage. E85 puts a lot more demand on the fueling system. Since methanol runs off its own tank, pump, etc it actually reduces demand on the fuel system. Power gains are similar to that of running an E30 blend, if not a bit more.

How Much Power Can the 2.0 EcoBoost Make?

With all of these mods the Ford 2.0L EcoBoost is capable of about 300-320 horsepower and 340-360 lbs-ft torque. That’s a good amount of power for a pretty small turbo engine. It’s also probably plenty of power for most. Of course, an upgraded turbo and other mods can take the 2.0L EcoBoost even further but that gets expensive. Turbo mods are expensive and then you start adding in fueling mods, internal upgrades, etc and costs skyrocket.